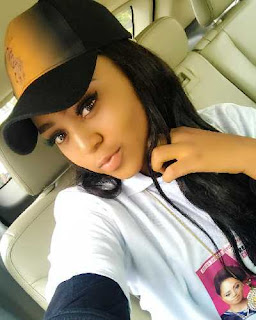 You would have probably seen some of her pictures on social media,
what actually raised my curiosity was the fact that I haven't actually watched any of her movies lol,pardon me for that,but the way she was receiving affection and accolades from her young teeming fans made me to become curious.

--
---
I had to research and find out Top 20 facts about this pretty young teenager named Regina Daniels that has won the hearts of both the young and old Nigerian movie lovers.


For some reason,she reminds me of Kylie Jenner lol,check out some facts about this most sought after 16 year old Nigerian actress.

She disclosed that her greatest influence on her life is her mother Rita Daniels,who is also an actress and Chairman of Delta State Actors Guild of Nigeria

Regina Daniels was 7 years old when she was given her first shot at stardom.

5. Why choose to become an actresses?

According to the young teenager,it was something she was passionate about,and she

--
---
enjoyed watching Nigerian plus also the fact that she is very emotional,all that transcends to being a good actress.

6.Juggling her acting career and studies


According to Regina,she tries to study ahead of other students in her school and brings her books to movie shooting locations so that she can study,moreover she has been given a separate arrangement and study schedule by her school proprietress.
She attended Hollywood International school in Asaba,currently she is an undergraduate student at Igbenedion University Okada.

7. How much does Regina Daniel earn per movie?

Starting of,her biggest paycheck was N10,000,according to this youngster she now earns N500,000, half of a million naira for a movie.

Regina disclosed that she wants the world to know her,she wants to become a mega superstar,and at the pace she is going,she doesn't seem to be slowing down.

Regina Daniels disclosed that sometimes she wished she wasn't so famous,disclosing that at times when she is out with her family she is always accosted by her teeming fans who

The youngster has disclosed that she had featured in over 100 movies even before she turned 15,some of the movies she has starred in are listed below:

11. On becoming a Producer

She has already ventured into the lane of movie production at such a tender age,a feat that most seasoned nollywood actors and actresses has not yet accomplished.
She has produced two movies titled The Jericho and Twins Apart.


That is actually inevitable,it comes with being a movie star,when she was asked how she

--
---
handles thousands of male fans that adore her,she disclosed that its simple,she lets her mother handle the situation in a calm and respectful manner.

Regina has five siblings and she rides high on her family’s support,they support whatever she is doing.

16. Most cherished item in the world

Her response was swift and precise, 'that would be my mother'.

--
---
calling her 'Ekwensu' which means 'Devil' in the Igbo language,at first she was shocked,but later she remembered that she once played a role in which she was called 'Ekwensu',that was preety an embarrassing moment she recalled.

18. Giving back to the community


Regina Daniels founded the Regina Daniels Charity Foundation,a non-governmental organisation that is focused on disabled and orphaned children,her organization cares and provides for them.

Regina disclosed that she is totally different from the roles she plays,every good actress

--
----
should be able to play the character of the role she has been given,that doesn't necessarily mean that is how she is in real life,'' I'm a simple and easy going girl '' she said.

According to her,its not always easy being a newbie and starting off,Nollywood is an industry that is full of envy and they will try to dissuade and discourage you in the beginning she said,unless you are determined not to quit, according to the teenager,she has remained focused and steadfast.

When asked what her dislikes are she said 'craftiness and proud look'.
Regina is currently married to business man Ned Nwoko.
Labels: COUNT DOWN