Facts About Religion In Nigeria 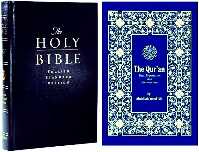 I don't know about you,but I definitely know that Nigerians are
quite religious,everything literally revolves about religion in Nigeria.

A typical Nigerian is so religious that he or she must pray
--
---
before embarking on any task whatsoever.

Facts About Religion In Nigeria

Lets take a quick look at some facts about religion in Nigeria that you didn't know until now.
--
---
Read Also: All You Need To Know About Nigerian Coat Of Arms
--
---