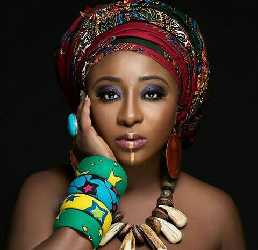 No doubt she is one of Nollywood's most talented and beautiful actress.
36 year old Ini Edo is from Akwa Ibom. Her break through
movie was th*ck madam which she starred in year 2003.


Ini Edo showed her talent for acting from when she was a child,she always took part in the church drama group,and always acting whenever she can.

Ini Edo had her secondary school education at Cornelius Connely College in Calabar before gained admission to study theatre acts at the University of Uyo where she bagged a diploma in theatre Arts.

She also went ahead to complete her bachelor's degree program at the University of Calabar where she studied English Language,In 2014 she got a scholarship to study law at National Open University of Nigeria.
--
---
Like most nigerian parents,Ini Edo’s parents didn't want her to become an actress,they wanted her to get her degree first,but she was determined to pursue her dreams,at age 19 she decided to take a leap of faith.

Luck eventually favored Ini Edo when a movie producer saw her talent and took the young Ini under his custody,although it wasn't easy juggling both acting and schooling at the same time.

In November 2008,Ini Edo married a Texas based businessman named Philip Ehiagwina, an occasion that was much publicized by the Nigerian media.

Her wedding took place both in Nigeria and Texas. Ini Edo’s husband Mr Ehiagwina had already been married before to a Nigerian-American model and actress named Ruth Okoro.

Her marriage to Phillip Ehiagwina ended in year 2014,currently Ini Edo revealed that she is pregnant and expecting a child soon.

Ini Edo is an Ibibio and she had quite a humble beginning,Her mother was a teacher and her father, a church elder,she is the second of four children, three girls, one boy.

In year 2000. Ini Edo impressed a producer at a movie audition,she eventually got the role and featured in her first movie in 2000,ever since then she became a household name and has become one of the most sought after actress in Nollywood.

In 2016,Ini Edo was appointed as The Special Assistant To The Akwa Ibom State Governor on Culture And Tourism by Gov Udom Gabriel Emmanuel,a political appointment she is currently till date.