Top 15 Richest Nollywood Actresses And Their Current Net Worth 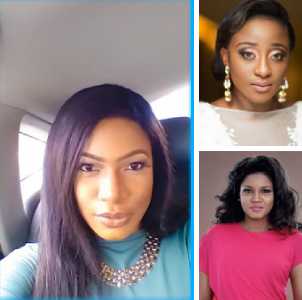 If you don't know,its about time you know that the Nigerian Movie industry known popularly as Nollywood is the third largest in the world.

America's Hollywood and India's Bollywood coming in at the first and second position.

Nollywood has given a few of this lucky ladies the platform to become rich and create wealth for themselves.

--
---
I present to you the top 15 bank able,richest,and highest paid Nollywood actresses,their endorsement deals and their current net worth.

Genevieve Nnaji's movie Lion Heart earned her a couple millions of dollars this year,the movie made history as the first Nigerian Nollywood movie to be featured in Netflix.

Genevieve Nnaji is one of the most successful and most popular female Nollywood actresses in Nigeria.

The business savvy actress has appeared in other several movies and has also produced a couple of successful nollywood movies.
Genevieve is also a singer and fashion designer.

She has bagged some major endorsement deals with companies such as:
Her Etisalat deal reportedly earned her N100 million and the deal with Polo is reportedly N70 million, while the Cintron drink deal allegedly got her N50 million.


The beautiful actress has a Mercedes Benz G-Wagon worth 30million Naira, a Range Rover Evogue worth 19million Naira plus houses in Ghana and Ikoyi, Lagos worth several millions of Naira. She is currently the richest Nollywood actress this year.

One of Nollywood's award winning actress, Rita Dominic who is undoubtedly one the oldest faces in Nigeria's Nollywood movie industry has been estimated to be the 2nd richest nollywood actress in 2019.

Rita is also a savvy business woman with a lot of successful movies and endorsement deals.

Some of her endorsement deals include:
She is reported to own fixed assets worth over N40 million ($240,000) which includes some landed properties and two houses.

Fresh faced nigerian actress Mercy Johnson came into the Nigerian movie industry in 2004 with the sole she played in the movie “The Maid”.

Ever since she has worked her way up the ranks to become one of the richest nollywood actresses.

Its reported that Mercy Johnson charges up to N2 million for a movie role.

Mercy is reported to have a multi million naira 6-bedroom duplex,with a roofed car park, a gym,bar,swimming pool,terrace,a pent house coupled with the boys-quarters at the back.


Mercy also has a knack for cars,she drives a N16million lexus SUV and owns several landed properties in Lagos.

--
---
She also bagged a political appointment as a special adviser to Kogi State Governor.


Funke Akindele, popularly referred to as Jenifa hit the jackpot when she began to produce the Tv series popularly known as “Jenifa’s Diary”.


--
----
The show became an instant hit and ended up generating millions of naira.

The star actress also has bagged endorsement deals with companies like:
She also lives in a 7 bed detached duplex at Amen estate in Ibeju Lekki.

Ini Edo is one of Nigeria's actress that earns a six figure salary and one of the most popular actresses in Nollywood.

It has been speculated that she has a lot of landed properties including buildings.

--
---
She has also bagged endorsement deals with companies like:
Ini Edo is definitely one of the richest actresses in Nollywood as she lives in mansion worth millions and drives a Mercedes G-wagon AMG G-65.

Read Also: What You Never Knew About Ini Edo

The Nollywood actress has featured in many nigerian movies and one of the popular faces in nollywood and the nigerian entertainment industry.

She is also a regular judge in talent shows in Nigeria.
She has also bagged some endorsement deals like:

Veteran actress and Mother of Clarence Peters has paid her dues and paved the way for younger nollywood actresses.

Popularly known as Mama G. She is one of Nollywood's bankable veteran actresses.
Her net worth is estimated to be around N390 million.

One of the top Nollywood producers and actress.

--
---
She also has a company named Dcovi Entertainment.
She has 4 exotic cars and owns a home at Lekki. her net worth is N390 million.

She is definitely not a regular face in Nollywood but she is quite bankable because of her hubby Jason Njoku who was the CEO of Iroking.

She is the CEO of ROK studios, a very popular film production studio based in Lagos that generates millions.

Uche Jombo is one of Nollywood's top actress and producer and has featured in several movies.

She has also bagged several endorsements with companies like Glo.
Uche jombo was reported to have built a home in lekki worth millions.

The award winning actress married bubby Linus Idahosa in Paris, France in 2012.
She has also bagged several endorsements like:


Chike Ike is one of Nollywood's actresses who has been on a steady rise in the Nigerian movie industry.
She is also the brand ambassador of Bullet Energy Drink,she is also a UN Ambassador, Refugee Ambassador for Displaced persons and founder of the Chika Ike (Help A Child) Foundation.

She owns a boutique called Fancy Nancy in Abuja and her net worth is estimated to be about N140 Million.