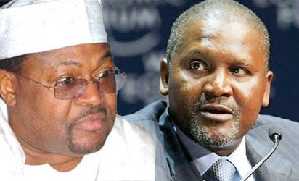 Nigeria is Africa's most populous country,with an estimated population of over 200 million people.
Nigeria is also home to some of the most richest men in Africa that has set a pace when it comes to business and entrepreneurship.

--
---
This article contains the current list of the top 10 richest men in Nigeria.

1. Aliko Dangote
Aliko Dangote is currently the richest man in Africa and Nigeria,currently he has a net worth of $14.4 billion.

Aliko Dangote is a Nigerian billionaire businessman, who owns the Dangote Group, which has interests in commoditie,his company operates in Nigeria and other African countries, like Benin, Cameroon, Ghana, South Africa, Togo and Zambia.

Dangote's fortune came from the business of production,importing and selling of cement, sugar and flour.
Currently he has added oil, rice and fertilizer to his chains of businesses.

Mike Adenuga is a Nigerian business man and one of the richest black people in the world.
His telecommunication company Globacom is Nigeria's second-largest telecom operator.
Mike Adenuga also owns stakes in Equitorial Trust Bank and oil exploration firm Conoil.

--
---
Mike Adenuga is currently  the second Richest man in Nigeria.

3. Femi Otedola
Femi Otedola is a seasoned Nigerian businessman and Chairman of Forte Oil Plc.
He is also the CEO of Zenon Oil and Gas.


Otedola also has interest in real estates amongst other sectors.

Theophilus Yakubu Danjuma was the Nigerian Army Chief of Army Staff from July 1975 to October 1979.

He was also the  Minister of Defence under Olusegun Obasanjo.
TY Danjuma is currently the chairman of South Atlantic Petroleum (SAPETRO).


--
---
He is also into fertilizer and shipping industry with a stake in NALComet, one of Nigeria’s largest shipping companies.

AbdulSamad Isyaku Rabiu is a Nigerian businessman and chairman of BUA Group.

BUA group is a Nigerian conglomerate with interests in manufacturing, infrastructure and agriculture.

6. Tony Elumelu
Tony O. Elumelu is an economist,and an entrepreneur.He is the Chairman of Heirs Holdings, and the founder of Transcorp.

Orji Uzor Kalu was The former governor of Abia State and the founder and chairman of Slok Holding.

Slok holding is a conglomerate with interest in shipping, banking, oil, trading, manufacturing and the media.

Orji Uzor Kalu became a business man after he was expelled from a Nigerian University for allegedly spearheading a series of student riots.

8. Jim Ovia (Net Worth: $1 billion)
Jim Ovia is the founder of Zenith Bank Group. He is the largest individual shareholder with about 9.3% stake.

Jim also is an investor in real estate business,he also has an investment in Nigerian telecommunication industry.

He is also involved in $1.5 billion petrochemical complex construction

--
----
He  has also served as the Vice President of Nigeria Association of Indigenous Petroleum Explorers & Productions (NAIPEC).

His company has interest in the Nigerian Upstream Oil and Gas sector. Mohammed Indimi founded his company way back in 1990.