Who Is The Richest Pastor In Nigeria? 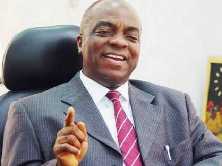 The richest pastor in Nigeria is Pastor David Olaniyi Oyedepo with a forbes estimated net worth of $150 million dollars.

He is the founder and Bishop of Faith Tabernacle in Ota, Ogun State, Nigeria also known as Living Faith Church Worldwide.

He hosts three services every Sunday.

He founded the Living Faith World Outreach Ministry in 1981.

Bishop Oyedepo owns private jets and homes in London and the United States.

He also owns Dominion Publishing House, a publishing company that publishes all his books.

He is also the founder and owner of Covenant University.

David was born to a Muslim father and a Christian mother.

His father named Ibrahim was an Islamic healer while Dorcas, his mother attended the Cherubim and Seraphim (C&S) order.

David was introduced to Christianity by his grandmother who was a Christian.

David grew up with his grandmother in Osogbo, Osun State where she taught him about Christianity and how to follow Christ.

Bishop David's Church Winners Chapel is located in over 300 cities also in all 36 states of Nigeria and 45 African nations including Dubai, the United Kingdom and the United States.
David Oyedepo studied architecture at Kwara State Polytechnic.

He worked for a short period with the Federal Ministry of Housing, Ilorin before leaving to start his ministry.

David Oyedepo was ordained as a pastor on September 17th, 1983 and went ahead to start Living Faith Church in Kaduna state.

David later moved the church to Lagos and from there the church began to spread to other parts of Nigeria and the world.

Bishop David Oyedepo is the Chancellor of Covenant University and Landmark University.

He is currently worth over $150 Million dollars.

In David's early days,his grandmother taught him the importance of tithing.

Oyedepo claimed to receive a mandate from God through an 18 hour vision in May 1981, to liberate the world from all oppression of the devil through the preaching of the word of faith.