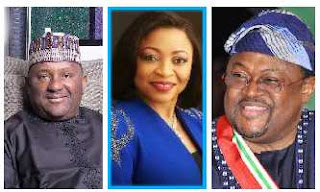 Truth be told,there are a lot of rich people in Nigeria,
but for some reason their source of wealth has not been verified by forbes and hence has not been listed.

--
----
This article contains the current list of the Top 5 Richest People In Nigeria and their net worth.

The people on this list are legit Nigerian business tycoons that are respected both in Nigeria and outside the shores of Nigeria.

Now let's check out the top 5 richest people in Nigeria this year.

Aliko Dangote is a Nigerian billionaire and CEO of the Dangote Group of companies.

Aliko was born in Kano State Nigeria in 1957 to Mohammed Dangote and Hajia Mariya Sanusi Dantata.
--
---
Dangote conducts his business in Nigeria and several other African countries including Benin,Ethiopia,Senegal, Cameroon, Ghana,South Africa,Togo,Tanzania,and Zambia.

Currently Dangote is the Richest person in Nigeria this year with an estimated net worth of US$12.5 billion.

Mike Adenuga is a Nigerian business tycoon,he is rated as the second-richest person in Nigeria.

He is the owner of Globacom,his telecommunication company is the second largest telecom operator in Nigeria,his telecom company Glo also has operates in Ghana and Benin republic.
--
---
Mike also owns a major stake in Equitorial Trust Bank and is the Chairman of the oil exploration firm named Conoil.

According to forbes,Mike is worth about $5.8 billion which makes him the second richest person in Nigeria behind Aliko Dangote.

With this feat he is also the third richest person in Africa.
Mike was born in Ibadan, Oyo,Nigeria in 1953,he attended Northwestern Oklahoma State University,the father of seven children currently lives in Banana Island in Ikoyi Lagos State Nigeria.

Femi is a Nigerian businessman,and chairman of Forte Oil Plc.

Earlier in his life,in the 1980's he was in charge of his family’s printing business before he diversified and ventured into trading of petroleum products.
--
---
His company imports fuel products. He is also the founder of Zenon Petroleum and Gas Ltd. He is also a big player in real estate,shipping and finance business in Nigeria.

Femi Otedola Was born in 1962 in Ibadan, Oyo State, Nigeria,he currently has a Net worth of about US$550 million,he is the father of Florence "DJ Cuppy" Otedola, a Nigerian Dj.

Back in 2014 she became the richest black woman of African descent in the world,a title she took from Oprah Winfrey.

She is involved heavily in the oil,fashion and printing business in Nigeria.
--
---
Folorunsho is the group managing director of The Rose of Sharon Group,Digital Reality Prints Limited and the executive vice chairman of Famfa Oil Ltd.

She has an estimated net worth of $2.1 billion and was listed as the 87th most powerful woman in the world by Forbes.She is also the richest woman in Nigeria.

Folorunsho was born in 1951 in Ikorodu, Lagos State, Nigeria,she is married to Modupe Alakija,she is also a mother of seven children.

AbdulSamad Isyaku Rabiu is a Nigerian businessman and founder and chairman of BUA Group.

--
----
AbdulSamad Isyaku Rabiu has interests in manufacturing, infrastructure and agriculture.He is also the chairman of Nigerian Bank of Industry.

Forbes in 2013 estimated Abdul Samad's wealth at $1.2 billion,he is definitely one of the richest people in Nigeria.