In this post we will quickly take a look at the list of Davido's cars,houses and their net worth

Davido has certainly worked really hard for his fame and money not minding the fact that he is from a wealthy home,his father is a billionaire businessman.

According to sources,Davido has a house that is located in Atlanta, Georgia in the United States of America. 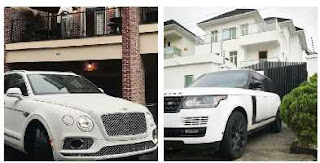 He also has a house in Lekki area of Lagos,according to sources online,his house costs him about ₦140 Million Naira to build.

The house is a semi detached four bedroom duplex,with a properly furnished interior.

Davido’s certainly has a thing for cars,over the years,he has bought different types of foreign cars,in fact he splashes his millions on solid automobiles.

--
---
Listed below is the full list of all Davido's Cars and their estimated net worth.