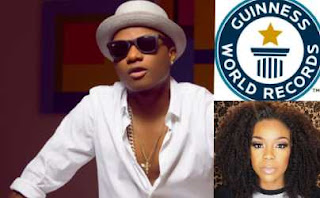 The Guinness Book of Records is a reference book
published yearly which list world records of human achievements and the extremes of the natural world.


According to sources,the record book started in back in 1954 after it was co-founded by brothers Norris and Ross McWhirter in Fleet Street,London United Kingdom.
--
---
The book is currently published in 100 countries and in 23 languages.

In this post we are going to take a quick look at some of the top Nigerians that has ever set a Guinness world record and also the feat that bagged them such a prestigious award.

When Wizkid was contributing to Drake's song one dance,he probably never envisaged that it will put in in the record books,not only did Wizkid’s effort earn him a spot on the prestigious book,he was also nominated for a Grammy award.

Wizkid is the first ever Afro-pop artiste to appear in the record books,due to his efforts on the Canadian rapper Drake’s song 'One Dance'.

The song topped several charts worldwide and set the record as the most played song on Spotify with over one billion streams.

Dj Obi whose real name is Obi Ajuonuma set a world record on for the longest ever DJ set after completing a 240-hour marathon on the decks at a Lagos cafe.
--
---
He successfully broke the previous record of 200 hours set in Dublin by a Polish DJ called Norbert Selmaj in November 2014.

Kafayat Shafau popularly known as Kaffy broke the world record in longest dance with a time of 52 hours and 3 minutes in 2006.

She was able to achieve this feat with the help of her team who gave her all the encouragement that she needed.

Read Also: Top 75 Most Powerful People In The World

She has always had a passion for dancing,she is also a fitness and dance instructor and currently runs her own dance school.

She is married with two children.


Ever tried reading for 6 hours straight? I guess most of us wouldn't dare to do such,but thats not the case with Olawunmi Treasures Bayode who set a record of 150hours, a total of 5 days beating Nepali Deepak Sharma’s record of 113 hours 15 minutes in 2008.
--
---
Olawunmi Treasures Bayode is 40 years old and a father of 3 children,he set his record at the Herbert Macaulay library,Yaba Lagos.

Chidera Anemege Popularly known as Chiddy of Chiddy Bang broke a record in 2011.

He became the current holder of the longest rap freestyle by an individual.

See Also: Top 5 Most Expensive Cars In The World

This record was set at the MTV O Music Awards in Las Vegas USA. Chidera free styled for 9 hrs,18 mins and 22 secs,according to reports he had to keep rapping even when he was in the bathroom in other to set the record,cool stuff right?

A Nigerian footballer named Harrison Chinedu broke the record for the 'farthest distance walked with a ball on the head'.

A lot of Nigerians dream of breaking only one world record,but that's not the case with Adetunwase Adenle. He is the only Nigerian that has more than two world records to his name.

Adetunwase Adenle probably has a thing for setting world records,he holds the record of the biggest painting that has been painted by the largest number of people.

He was able to achieve this through the assistance of 350 volunteers. His painting was the map of Nigeria.

Other records include the biggest football jersey in the world and also when about 300,000 students from 600 public secondary schools in Lagos brushed their teeth simultaneously at different locations.