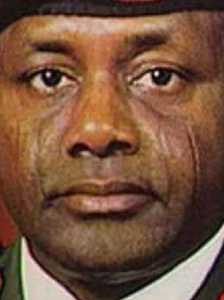 Sani Abacha was a dictator when he ruled Nigeria
during the military dispensation.

he is ranked where other African looters such as Mobutu Sese Seko who was one of Africa’s ruthless looter.

African leaders and government officials have a habit of embezzling public funds and putting the money in foreign accounts.

--
---
According to sources Abacha's stole money through different sources which include travelers check or wire transfers to Europe,American or Swiss accounts on the false pretense that the money was necessary for Nigeria's national security.

Abacha's daughter Gamsu Abacha,took to social media to say that  "no matter how poor they are,they will never be as poor as Dangote".

Lets take a look at the estimated net worth of Late Sani Abacha and some quick facts about the soldier that you never knew.

If Sani Abacha was still alive,he would have an estimated net worth of $10 billion USD,he would be among some of the richest men in Nigeria and Africa like some of his other retired Nigerian military head of state and colleagues.