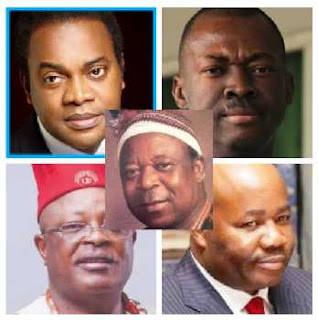 A Governor is a ruler of a state or a town.
In Nigeria governors are elected to serve for four years after which he or she might step down or seek for a re-election (2nd term) which also lasts for four years.

A governor in Nigeria can can govern a state for 8 years.
Nigeria is made up of 36 states. In this article we shall take a look at some of the best governors that has governed one of the states in Nigeria.

Sullivan Iheanacho Chime governed Enugu state from 2007 - 2015 under the umbrella of the People's Democratic Party (PDP).

Sullivan had his secondary education at the College of Immaculate Conception (CIC) Enugu,he later studied Law at the University of Nigeria,Enugu Campus,on graduating in 1980,he went to the Nigerian Law School, Lagos and graduated in 1981.

He is rated as one of the best governors of all time because he vigorously pursued his 4-point agenda for development which is Physical Infrastructure, Economic Expansion and Employment, Rural Development and Service Delivery.

Majority of the roads and infastructure in Enugu was erected during his tenure as governor.

He was called the 'Silent Achiever' because he avoided public functions that was set up to celebrate his achievements.

Donald Duke was the governor of Cross River state Nigeria from 1999 to 2007.
He is rated as one of the best Nigerian governor of all time.
--
---
Donald attended Corona School, Lagos and Federal Government College in Sokoto.

Afterwards he bagged  his LLB degree in 1982 from Ahmadu Bello University, Zaria,he later attended the Nigerian Law School Lagos in 1983.

He also bagged a L.L.M. in Business Law and Admiralty in 1984 from University of Pennsylvania USA.

After he became governor of Cross River,he immediately transformed the state. He is praised for making Calabar the tourist state in Nigeria. He initiated the Obudu Ranch International Mountain Race,the Calabar Carnival (Africa's biggest street party) and the Tinapa Resort.

Godswill Akpabio is ranked among the best Nigerian governors of all time. He attended the University of Calabar,in Cross River State, where he bagged a Degree in Law.
--
---

Akpabio became the governor of Akwa Ibom under the  People's Democratic Party (PDP). During his tenure there was an increase in infrastructure development in his state.

After governing Akwa Ibom state he contested and won the Senate seat of the Akwa Ibom North West.

David Umahi became the governor of Ebonyi State on the 29th of may 2015.
He attended Ishiagu High School and the Government Secondary School of Afikpo.

He bagged a Bsc in Civil Engineering from the Enugu State University of Science and Technology in 1987.

He is rated as one of the best performing governors in Nigeria today. He was re-elected as Governor for a 2nd term on the 16th of March, 2019.

He was also called the weeping governor because he was so passionate about his state that he resorts to crying while trying to convince the federal government to pay more attention to his state.

He was regarded one of the best Governor ever to rule a state in Nigeria. He died on the 6th of January 2004 shortly after returning from a state sponsored trip to Germany for treatment.

The Airport in Imo State was renamed after him.