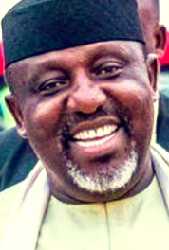 Rochas Okorocha is one of the most controversial
politician in Nigeria,in this article we are going to take a look at some of the quick facts about the politician and business man that you never knew and also estimate his current net worth this year.

Hotvibes Media estimate Rochas Okorocha's net worth to be around ₦ 50 Billion Naira.

Rochas Okorocha's aid revealed that the business man and politician was worth about 50 billion Naira which is approximately 140 million dollars before he became the governor of Imo state,currently he is estimated to have a total net worth of about 400 million dollars.