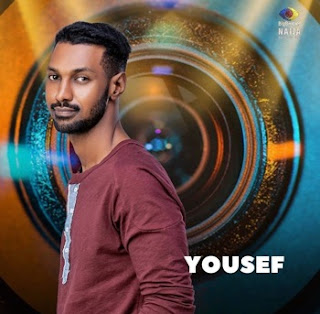 This article contain the current estimated net worth of BBNaija Yousef this year,

his biography,instagram page,hobbies,age,quick facts and latest update about this celebrity.

-- ---
Yousef is a Nigerian reality Tv show star that participated in the sixth season of big brother Nigeria tagged shine ya eye.

Yousef is estimated to have a net worth of $10,000 United States Dollars.

3. Yousef Is The Deputy Head Of House:

Peace has emerged as the first Head of House for the Big Brother Naija Shine Ya Eye season,and she has picked Yousef as her deputy head of house.

With thier new positions, they both have exclusive access to the Head of House room.

However,for this season, other housemates can visit the room for two days,excluding sleep overs.

Also,Peace and Yousef are automatically saved from eviction this week because of their new roles.

2. Am In An Open Relationship:

Yousef has revealed that he is in an open relationship.

On Tuesday he was having a conversation with a fellow housemate named Arin,he went ahead to reveal that he likes being in an open relationship and this has fueled his decision.

“It’s just like you’ve been dating people for long but you’re not sure you’re gonna marry her and she’s not sure she’s gonna marry you, and then time is going.”

He also added that he knows that his current girlfriend is definitely not his soulmate as they have dated for over a year and are in an open relationship.

1. My Students Have A Crush On Me

Yousef,one of the housemates in Big Brother Naija Season 6,revealed to Ebuka and some other housemates that his students have a crush on him.

He also stated that he is not a paedophile.