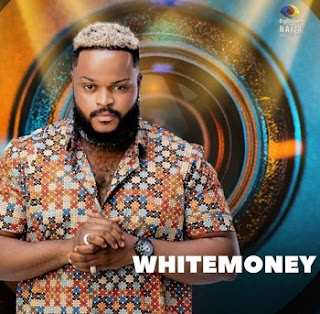 This article contain the current estimated net worth

of BBNaija White Money this year,his biography,instagram page,hobbies,age,quick facts and latest update about this celebrity.

-- ---
White Money is a Nigerian reality Tv show star that participated in the sixth season of big brother Nigeria tagged shine ya eye.

White Money is estimated to have a net worth of $50,000 United States Dollars.

Whitemoney,said he was once a bodyguard.

The Housemate made the revelation during a chat with Yerins, JayPaul, Pere and Yousef in the dining area on day two of the competition.

The Enugu indigene said he worked as a professional bodyguard for a while before quitting.

He went on to narrate why he quit the job after an experience that left him in fear.

Whitemoney said one of his principals was so attached to him that he refused to engage the services of other bodyguards insisting he wants only him.

He further said he changed his mind about continuing with the job after he attended an event with the principal in Anambra without an assistant.

He also told Yerins, Pere, and JayPaul that he also quit engineering because of his phobia for heights and some intricacies.

2. I Had To Hustle To Survive

White Money while speaking to some fellow housemates has revealed that he did a lot of menial jobs to survive. Some of these jobs include Klara riding,barbing,photography etc.

He had these to say: “ I’ve done many things, I ride Okada tire. I do my barbing during the day and ride Okada at night

1. Igbo Men Show Off In The East

Big Brother Naija Shine Ya Eye housemate, Whitemoney, has spoken on the culture of ‘spraying’ money, according to him Igbo people show off their wealth in their hometown rather than in Lagos.

He also have example citing popular Igbo businessmen such as Obi Cubana and e-money.

In his own words “I’m speaking for the Igbo clan; majority of the Igbo do not spend money where they hustle for money.

“I’m hustling in Lagos, I won’t be balling in Lagos. If you want to know my worth, follow me to my village.

An Igbo man can be living in a flat here and pay rent to landlord but he has a mansion worth billions in his home town.”