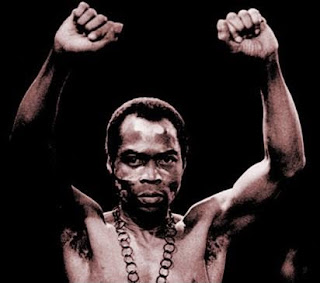 This article contain the current estimated net worth of Fela Kuti this year,

his biography,age,Instagram page,quick facts and latest update about this celebrity.

Fela is a Nigerian multi-instrumentalist musician and Pan-Africanist,he was referred to as one of Africa's most "challenging and charismatic music performers".

Fela was a first cousin to the writer and Nobel laureate Wole Soyinka founder of the Pyrates Confraternity and the first black African to win the Nobel Prize for Literature,he was also the son of Late women right activist Late Madam Fumilayo Ransome-Kuti who was the first Nigerian women to drive a car and ride a motorcycle.

She was also Nigeria's first ever representative at a women's international conference (in the USSR in 1963) and was one of the founders of the Nigeria Union of Teachers and the Nigerian Students Union.

Fela is regarded as the pioneer of Afrobeat which is currently one of the best music genre in the world today.

Fela married his first wife Remilekun Taylor in 1960 while he was still studying at the Trinity college of music in London,they had three children namely Femi,Yeni and Sola Kuti,before his death he fathered other children from some of his other wives namely Kunle,Shalewa,Motunrayo and Seun Kuti,in total he fathered 7 children.

The legendary musician was openly polygamous,in February 1978 he collectively married 27 women in traditional ceremony,he lived with all these women in the same house in a compound which he referred to as Kalakuta Republic.

Fela’s Kalakuta Republic was later raided by 1000 soldiers after he released an album titled ‘Zombie’ where he criticized the Nigerian military government led by Muhammed Buhari who eventually returned to power as Nigerian president in democratic Nigeria.

There were frequent raids at Fela’s Kalakuta Republic home,during one of the invasion by 1000 soldiers Fela was severely beaten,his elderly 77 year old mother Fumilayo Ransome-Kuti was thrown from a window which led to her death,his house was burnt down alongside his studio,instruments and master tapes. 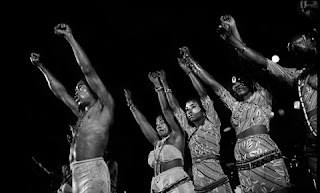 Fela was jailed by Muhammed Buhari’s administration in 1984 and was later released 20 months later in 1986,he was charged to court and sentenced 5 years in prison for laundering of £1,600 pounds (Sham Currency smuggling Charges) Fela said he got it legally from abroad as money earned.

The Afrobeat legend was released after the Regime of Muhammadu Buhari was overthroned by Ibrahim Badamasi Babangida (IBB) in 1986.

The iconic legend went ahead to divorce most of his wives after he was released from jail claiming that marriage brings ‘jealousy and selfishness’.

Fela died on the 2nd of August 1997 from complications related to AIDS,he was buried at the Kalakuta Cemetery in Ikeja, Lagos,Nigeria.

-- ---
Fela’s daughter Yeni Anikulapo-Kuti started Felabration in memory and celebration of her father Fela Kuti,Felabration is an annual music festival conceived in 1998,it is usually a one week event held at the Afrika Shrine in Ikeja Lagos,this event attracts visitors from around the world,it is also considered as an official tourist destination by the Lagos State Government.