Wizkid,Davido & Burna Boy? Who Has The Most Expensive VVS Diamond Jewelry Collection? 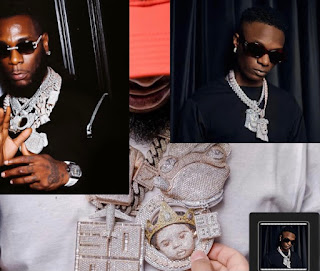 The music game has changed all over the years,musicians are among some of the

richest people in the world,they also do not hesitate to always show off their wealth and lavish lifestyle.

Nigerian musicians and producers have put AfroBeats on the world stage,they sell out the most expensive arena around the world and make millions of dollars,they drive the best foreign cars from Lamborghini to Ferrari,Bentley etc so it’s only expected that they rock and own some of the most expensive Diamond jewelry collections as well.

Today it’s not about comparing who has the best cars and houses between Wizkid,Davido and Burna boy.... naaah!! that sound too cliché.. today am gonna check out their Diamond VVS Collections and see who has the most expensive diamond collection among these highly successful and talented musicians,just for the records the prices stated here are not accurate but just estimates,anyways let’s have some fun.

Wizkid,Davido & Burna Boy? Who Has The Most Expensive VVS Diamond Jewelry Collection? 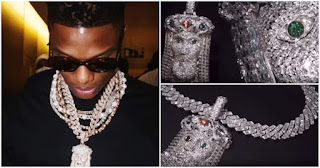 Coming in at number 3 is Wizkid,he is no doubt one of the most successful musician to come out of Africa,the Grammy award winning musician has a thing for jewelry.

Wizkid has a couple of Diamond studded jewelry,his most impressive rock is the one he bought from London based jeweler named A-Jeweller,the jewelry is a diamond-studded 60-carats Jesus-piece pendant with a heavily studded Cuban necklace piece estimated to be worth between $100,000 - $200,000 USD.

Starboy has been seen rocking about 4 different VVS Diamond necklace including the 60-carats Jesus-piece,his VVS Diamond collection is estimated to be worth around $500,000 USD which has earned him the third spot on this countdown. 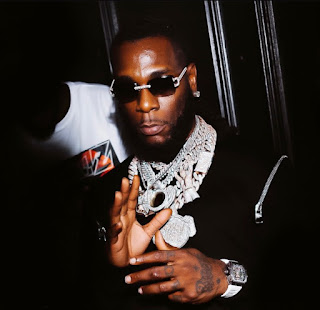 The second super star holding down the 2nd position on this countdown is the giant of Africa himself,the Grammy award winning artist rock around eight diamond studded Cuban necklace with pendants,some of his necklaces including a custom made diamond necklace with the inscription “African Giant”,however his most iconic necklace is a custom piece Fela VVS Diamond necklace made by DJ Nu Kidd.

Odogwu has also been seen buying Diamond necklace from jewelers such as A-Jewellers,Obis Gallery etc however it seems that his most favorite jeweler is London based A-Jewellers.

Odogwu’s VVS diamond necklace collection is estimated to be worth around $700,000 USD which has earned him the 2nd position on our countdown. 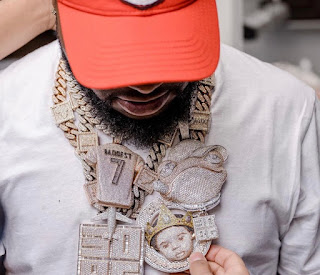 Davido is rated as one of the biggest Afrobeats superstar in the world,over the years he has shown his love for Diamond VVS Cuban necklaces,bracelets,rings and watches,Davido has also gifted members of his team diamond 30 BG necklaces,he also doesn’t hesitate to gift his family members too,DMW’s boss diamond necklace collections include several Cuban links,Diamond studded pendants i.e a frog head,001,number 7 jersey,DMW logo and 30 BG Diamond studded pendants.

He shops from several jewelers,however his favorite jeweler is Atlanta based jeweler named Ice box.

OBO’s Diamond VVS collection is estimated to be worth at least $900,000 making him the musician with most Diamond Jewelry in the Nigerian music industry.

Well that’s about it,these are the top three VVS diamond rockers in the Nigerian music industry,who do you think should have made the list or should be number one? let us know in the comment section below,and also if you are a fan of Diamond VVS jewelry just like me you should know that you mustn’t travel to Atlanta or London to buy some diamond drip,you can also buy from a Nigerian dealer named Obis Gallery.

That’s just about it,thanks for reading..