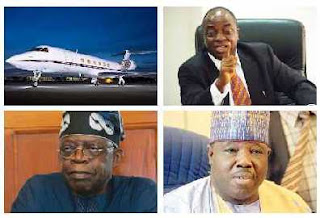 Private jets cost a lot of money,and before anyone can own a private jet,he/she must be a billionaire.


It's also estimated that private jet owners in Nigeria spend about 30 billion Naira yearly on the maintenance of their private jets,currently,Nigeria has over 100 owners of private jets.

Cumulatively these 100 owners of private jets in Nigeria spend between $500,000 to $1 million to maintain their jets annually, translating to N30.5 billion Naira.

Do you know that Nigeria is the third highest private jet owning country in the world after America and China and also the number one private jet owners in Africa?
-
-
Between 2013 -2014 Nigerians spent over $6.5 billion dollars on private jets,currently these rates has fallen slightly because of the economic recession.

Before we digress,lets quickly take a look at some of the top 10 owners of private jets in Nigeria this year.

Bishop T.B Joshua is one of the most popular and richest pastor in Nigeria and in the world.

He is the founder of The Synagogue Church of All Nations which attracts visitors from all corners of the world.

It is no doubt that Nigeria has the highest number of pastors that own private jets in the world,joining the list of one of the top owners of private jets in Nigeria is Pastor Ayo Oritsejafor.

--
---
He is the founder and the Senior Pastor of Word of Life Bible Church and was a former President of the Christian Association of Nigeria(CAN).

Folorunsho Alakija is also one of the most influential woman in Africa. The billionaire mom owns a Bombardier Global Express XRS.

Aliko Dangote was once on the list of the richest men in the world before falling off,however he is still the richest man in Africa,Aliko has an estimated net worth of about $12.5 billion dollars.

The Jagaban himself! Bola was the former Governor of Lagos state which is the richest and economic heartbeat of Nigeria.

The former governor is also a seasoned politician and one of the influential figures in the All Progressive People Party (APC),Nigeria's ruling party.
Bola owns two private jets.

Mike Adenuga is one of the richest men in Nigeria and Africa. The seasoned businesses man has interest in telecommunications and oil.

He is also the owner of Globacom,one of Nigeria’s largest telecommunications network.

Mike owns 3 private which include a Bombardier Challenger 604, Bombardier Global Express XRS and a Falcon 7X.

Ali Modu Sheriff was a former senator and also a former Governor who was the first in Borno to serve twice.

--
---
He was also the former Chairman of People Democratic Party (PDP).

Ali owns 4 private jets out of which one is a Gulfstream G650 and 3 Dornier aircrafts.

David Oyedepo is rated as the richest pastor in the whole world,he is the founder and general overseer Living Faith Church Worldwide AKA winners Chapel.

With a net worth of over $150 million,he is also the richest Pastor in Nigeria.

David owns the largest church auditorium in the world,he also owns 4 private jets including a Gulfstream G550 and VG450 and Bombardiers 604.

Orji Uzor Kalu was the former governor of Abia state,he also has one of the largest fleet of private owned jets in Nigeria.